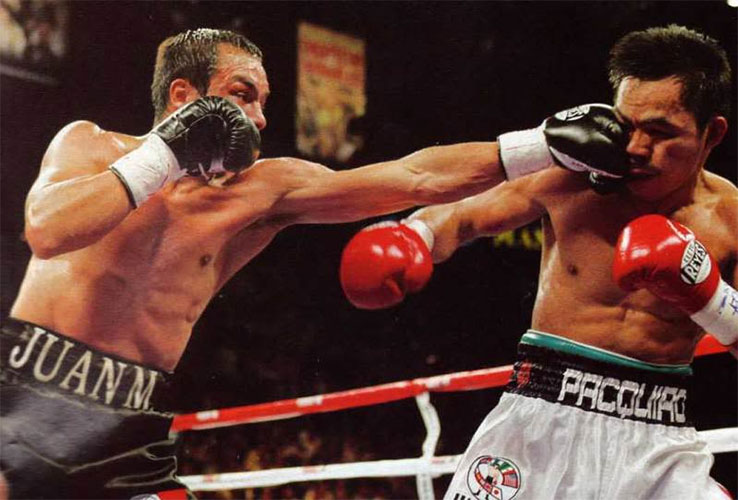 In this short article, we’ll be covering the basics of a boxing jab. What it is, how to perform it, and how it can help you.

It’s one of the simplest moves to master and one that we recommend to everyone as something to practice.

What is a jab?

The jab is a simple punch in martial arts. From a standard fighting stance (don’t worry we’ll cover this), you punch with the arm that is furthest out in front of you.

It’s quick, easy, and fast to recover from after throwing it.

Here’s a video from Jeff Mayweather explaining the jab:

We’re going to cover a few more of the technical details to help you through it.

1. Get into the boxing stance

The boxing stance is what you traditionally use when you’re in a boxing match.

You need to set yourself up in the following manner:

Keep in same fighting stance you were already in. Nothing else needs to move, and your weight distribution should stay the same. Only move your front hand, extend it slightly upwards and forward with your knuckles leading the movement. Let out a sharp breath as you do it.

When throwing the punch you need to rotate that arm as it comes out. At the end of the movement, your palm should be facing down. This ensures your landing the punch with your knuckles.

Another reason for the rotation is that it moves your shoulder up to cover you from the side of the head. It also stops your elbow from swinging out to the side during the punch.

You want to tighten up your first just before you make contact with your opponent. This makes the move much faster and saves wasting energy.

That’s the jab. It should be quick and relaxed – not hard and heavy. You need to pull it back and get back to defending immediately after you land it.

Some experts describe it like cracking a whip, almost like the intention is to slap your opponent with your knuckles. That’s a great way to visualize it.

What to avoid when jabbing:

Here’s what you should be careful of doing when you’re performing a jab:

Make Sure Your Elbow Stays Tight!

The biggest mistake you can make when jabbing is throwing your elbow out to the side. This is also known as throwing a chicken wing. There are several reasons why you shouldn’t do it:

Weaker – It’s harder for you to build up the power and momentuum you would get from an effectively rotated arm jab.

It tells too much – It’s much easier for your opponent to see coming and to defend themselves.

Not direct enough – A ‘chicken wing’ jab isn’t as accurate as a normal jab and may not land where you want it to. It also makes you develop sloppy habits.

Remember Your Other Hand!

It can be easy to just think about the hand that you’re throwing at your opponent. But you should also remember that you’ve still got your other arm in the mix.

If you let this arm down to throw your jab, you leave yourself completly exposed. Make sure you keep it up and defend yourself.

Lift Your Shoulder When You Throw It!

Not lifting the Shoulder when punching is a huge problem. You need your shoulder to protect the side of your head when you’re punching.

Not doing so can leave you exposed to a punch from the side. What’s more you’re not getting the full power out your punch as you’re not fully rotating the arm.

That just about covers it.

So, what muscles does jabbing help develop?

As jabbing is an isolated movement, the main area it’s going to work is your shoulders and your arms.

There are two ways jabbing can help condition these muscles. The first if you’re wearing gloves – they’re heavy. It’s essentially a high rep work out for your arm. This can help build muscle.

The second way it helps is with the stabilizing muscles in your arms. To throw a jab you need to control it, in doing so you need to keep it stable during the movement.

Your shoulders will get a workout in the front and middle deltoid heads every time you throw out a jab. Bringing your arm back into the fighting stance works your rear delt upon retraction.

When it comes to your arm itself, your tricep will get most of the benefit as the punch is essentially a straight pushing motion.

The jab is a fast and effective punch that is easy to learn, but difficult to master.

You should always remember that only your arm is moving during this punch. The rest of your body should remain in the fighting stance.