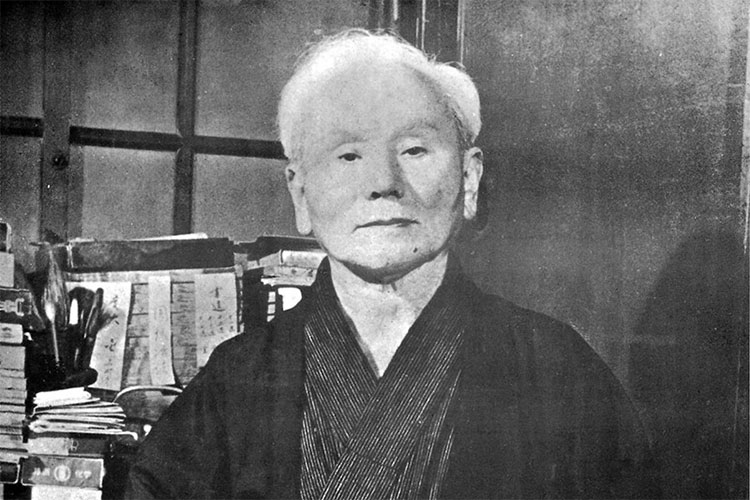 Also known as the ‘Father of Modern Karate’, Gichin Funakoshi introduce Karate to the Japanese mainland and contributed greatly to what it is today.

Having written numerous books on Karate, his autobiography, and given extensive teachings, Gichin left behind plenty of information for the world of martial arts to grow on.

This is his story…

During his school years he befriended a boy who was the son of Anko Asato. Asato was a Karate master and would be Gichin’s first teacher on the subject.

He was well-versed in both Japanese and Chinese philosophy and became an assistant teacher in Okinawa.

Funakoshi continued to receive training from Asato throughout his childhood, and became very accomplished in Karate before he was a young adult.

Karate and Moving to Japan

By 1910, Funakoshi was a Karate master. He had a range of students, with some even passing on his teachings. He was still in Okinawa, and finally starting traveling to mainland Japan towards the end of the decade and early 1920s.

In 1930, Gichin Funakoshi started his own association. This is where he really started to dig in his heels and spread the art of Karate.

The association was originally known as Dai-Nihon Karate-do Kenkyukai which is now known as Shotokai.

6 years later, the foundation was doing well. So, well that another dojo was opened in Tokyo. When he was in Tokyo, Funakoshi changed the meaning of Karate by modifying the written symbols. This is when Funakoshi started to put his mark on Karate as a whole as he had been redeveloping it.

He changed it from ‘China Hand’ to ‘Empty Hand’. Gichin claims he did this because it showed a deeper philosphical relevance – he chose ’empty’ over chinese because Karate is not tethered to any physical object.

This caused a stir with the more hardcore followers of Karate back in Okinawa. It was not the traditional form of Karate and it was being spread to a much bigger audience.

Due to their philosophical differences between Okinawa Karate masters and Funakoshi he decided to remain in Tokyo. It is this version of Karate which is the most widespread and what Funakoshi has pushed worldwide.

Ginchin Funakoshi really made an impact in the world of martial arts how he redeveloped Okinawan Karate. He reworked it philosophically and physically and spread it worldwide using Tokyo as a mouthpiece.

Although it may have cost him his connections in Okinawa, Funakoshi did what he believed in to make his dream a reality.