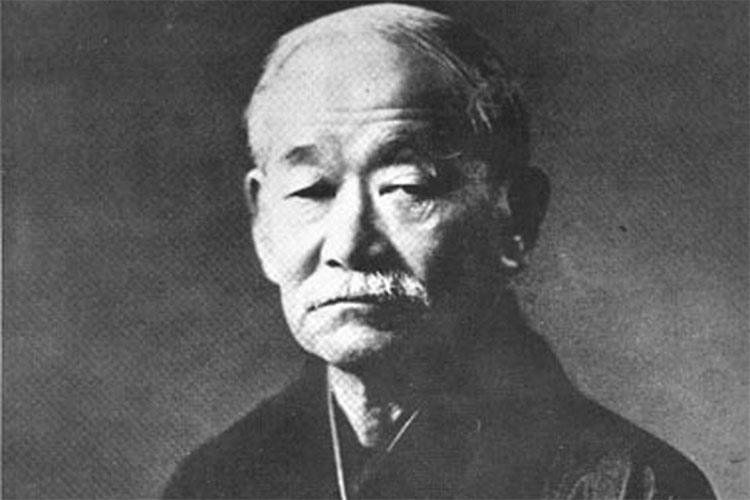 Kanō Jigorō was the father of the martial art Judo. He was an educator, athlete and even served on the Internatiional Olympic Committee among other things.

He was one hell of a martial artist. Here we’re going to give a small overview of Kanō Jigorō’s life and how he came to be the father of Judo.

Jigorō was born on the 28th October 1860 in Mikage, a town in Japan which is now part of Higashinada-ku in the Kobe region.

Kanō’s mother died when he was nine years old, and his father worked as both a lay priest and a senior clerk for a shipping line.

After his mother’s death, Kanō moved with his father to Tokyo. There he was put into private schools run by Europeans and learned both English and German.

Due to his small size as a child Kanō Jigorō was a victim of bullying. It was suggested that he learn jūjutsu to defend himself.

In 1877, Kanō began attending the Tokyo Imperial University. This is where he started his journey to find a good Jūjutsu teacher. Jigorō believed that his best option would be to seek out bonesetters who are expert practitioners of joint manipulation.

Kanō Jigorō believed that bonesetters that could perform martial arts would be the best teachers as they would have a deep knowledge of the body to go along with the craft.

He eventually found Fukuda Hachinosuke who was both a teacher of the art and a bonesetter. Fukuda’s training was rigorous. To learn you must beat the teacher or a senior student after being given the mechanics of a technique.

Fukushima Kanekichi was a senior at the school who Kanō Jigorō struggled to beat. He eventually found the only way he could win was with a fireman’s carry that he learned from western wrestling. This was the beginning of Kanō founding judo and is now known as the shoulder wheel.

Years later in the 1880s Kanō Jigorō was now a teacher of jūjutsu. His former masters would come along and train with him to support his teaching. Kanō would usually lose these bouts until he eventually began to always have the upper hand.

This was the making of Judo. Kanō realized that he could beat his opponent by breaking their posture during a fight. This would allow him to manipulate their body in a much easier fashion.

He named his new method Judo. Ju meaning ‘pliancy’ and do meaning ‘method’.

This is how it came to be, and how it came to develop, borrowing techniques from different disciplines to make it conquer the more pure forms of fighting. It would go on to develop for years under Kanō’s guidance and even began to be taught in the Japanese school system.

Judo is a fascinating martial art. It really seemed to break away from the tradition of Jujitsu and became a much more practical and effective art. By borrowing from other cultures, Kanō Jigorō was able to create a fresh version of the art and make it much more effective for the time.